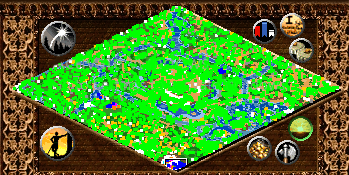 Hello, and welcome to the return of AOKH’s beloved Blacksmith Feature. For today’s feature we’re going to be looking at something a little bit different. Rather than looking at a particular file I’m going to talk about one of my favourite styles of multiplayer games – The UDP.

UDP stands for U Da Prey. A UDP scenario is an intense multiplayer scenario which were very popular back in the days of GameRanger and the Zone. The idea of the game that you have 7 players who are the Prey and 1 hunter. The Hunter has an unbelievably large army of over three thousand units covering the entire map, whilst the prey starts with 2 super units which constantly power-up, and have the option to buy more unit’s ford gold they earn for gaining kills.

The objective for the prey is to survive. One of your super powered units will be classed as your prey. This unit must survive to the end of the game. Any other units you have can be used to protect this unit. As prey your main challenge is to withstand the onslaught of attacks from the hunter’s ginormous army and keep you prey unit alive until the end of the game. After three hours the game is over and any players who prey are still alive are declared the winners.

The hunter in the other hand starts with a gigantic army of over three thousand units. These range from basic trash u it’s to armies of heroes and stronger elite units. The hunter must micromanage this huge army to hunt down the seven prey and kill them all within three hours. The hunter will be declared the victor if all the prey are dead before the three hours are up.

Finally, there is a second way to finish the game. The hunter is given a highly defended base, usually located near centre of the map. Inside this base is a king unit with a large hit point count. The prey can win the game early by counter attacking the hunter and killing his king.

Throughout the game there are a number of rewards that can be collected by both the hunter and the prey. These rewards consist of new super units, researching technologies and AP/HP upgrades for all your existing units. These are gained by acquiring kills, razings and conversions. All of the preys existing unit also regularly upgrade after every kill and tributes of food, stone and gold are also tributes to the prey. Across the map are shops where the prey can use these resources to buy extra units and upgrades. The hunter is also given a shop and has regular spawns of super units, each spawn being stronger than the last.

There is a whole range of UDP scenarios, with many taking various themes to create an immersive and entertaining atmosphere. Many creative trigger tricks are used to create the highly intense games, with some UDP scenarios amassing over eight thousand triggers.

For the rest of this feature I’d like to focus on one particular UDP scenario, which just so happens to be my favourite. It’s called The Deathly Cliffs. Originally created by >Heroes< it has been updated and enhanced by KakiharaBeast and uploaded to our Blacksmith.

Of all the amazing UDPs out there, The Deathly Cliffs is certainly the most creative and well-balanced. Set atop a cliff covered map cover wing various different climates, this scenario features many staple UDP features as well as adding a bunch of unique and original ideas. The game use different difficulty dynamics to balance the game effectively between the prey and the hunter and lots of creative trigger tricks, some which would amaze even the most technical scenario designers. As a multiplayer scenario, it is somewhat lacking in the map design and story elements, but The Deathly Cliffs features some of the best map design seen in a UDP.

So, there you have it. U Da Prey scenarios are intense and enjoyable multiplayer scenarios, proving you with hours of entertainment. I can’t recommend them enough.

Have you played a UDP before? What’s your favourite? Why not check one of the ones in our Blacksmith our and give it a go with your friends now!

posted 04-24-20 02:54 PM CT (US)     1 / 3
Oh I love this map... Had great times play all the bazillions of different u da prey versions in gameranger
Great mechanics overall, and a pretty unique feel as well (balance may be thrown out of the window sometimes, but who cares

posted 04-24-20 03:56 PM CT (US)     2 / 3
Yeah they’re great. I myself ambitiously attempted to created one about ten years ago but didn’t really get very far. I absolutely love these and I’ve been playing loads with my friends recently as we loved playing them back in the day.
THE DYSTONIAN CHRONICLES

I myself ambitiously attempted to created one about ten years ago but didn’t really get very far.

Yeah, there are tons of triggers and complex aokts tricks in this stuff; and you gotta copy and paste it all 7 times; for each player (which is probably the main reason why I focus on SP maps

)
At most I did some edits to the map, with bug fixes and balance changes (with the creator's permission; great guy btw) to play w some friends. There was some op relic mechanic or something don't even remember anymore.

Didn't check out the newest versions tho; may do that in my free in time in the future - btw is there a de version already? - I remember that there was a really cool one in a jungle map (like the lite edition or something similar).
The Fall of Hummaria -- Teaser [4.2] -- Project's Thread
Cavern Pirates -- The Treasure Hunt [4.6] -- Captain's Revenge
My Blacksmith