In-Depth Scenario Design FAQ
Posted by Aro on December 29th, 2003 @ 9:33 p.m.
da_hobo has compiled a very large FAQ in the Scenario Design forum that explains to new designers how to use the common tricks and features now known to many forumers, to the harder tricks that only experienced designers know.

I have noticed that there are many newbies and even regulars asking questions that to some people are common knowledge, so I am starting to compile answers to the commonly asked ones. (FAQ) Not saying “Search!”, not telling where to find the answer, just giving the solution. I know, I know; I’m wasting my time: people should search. But saying “Search!” repeatedly hasn’t stopped the questions. I know that this has been done (many times) before, sometimes successfully and sometime not. None of these answers or trick where discovered by me and I take no credit (except for compiling this ) And I know that I have too much time on my hands.

With up to 58 questions and links to many helpful posts and articles, this FAQ will help you become better at designing if you’re currently learning the ropes of the editor.

Giving Away Units in AoE III?
Posted by Aro on December 28th, 2003 @ 8:03 a.m.
Raptor the Good has posted up a thread in the Age of Empires III Discussions forum about an interesting idea he had about giving the player the ability to give away or loan their units to an ally. It has its drawbacks like any idea, but it would be useful if used correctly. Here’s a quote from the thread…

How about being able to give your ally some troops? If he is in trouble and can’t build fast enough you could select a group of units and click the give to ally button and click on whichever player you want to give them to. Or maybe just loaning them? They would automaticly change back to your color after a specified amount of time.

Feel free to add your own ideas or comments.

BsK $1000 MVP Tournament
Posted by Aro on December 26th, 2003 @ 6:26 p.m.
BsK Zone.com is holding an MVP tournament with the prize being $1000 dollars. This is, surprisingly, the first AoC tournament they’ve ever hosted. Here’s some information from their site…

As most of you know, BsK has quite a history of serving the AoC Community. With one of the most well known and respected forums around in the AoC Scene. A community news center along with a unparalleled recorded game database bskzone.com has been at the forefront of the AoC community for many years.

However, we have never hosted a tournament for AoC.

Thanks to SteveS and BsK_BeAst, two dedicated RM players, we are now able to offer the first Tournament hosted by BsK and we hereby call all RM players to join this event.

We in BsK and some of the most respected administrators from the RM-Community will do our best to make this a perfectly organized event – the rest depends on the players who sign up, play and provide us with entertaining recorded games.

This tournament is open to any player who is willing to join. You can feel free to sign up if you want to participate and take a look at the Settings and Rules. Sign-ups are closed on January 15th, and the tournament starts on the 19th. Good luck to all that enter!

Blacksmith Feature
Posted by Anastasia on December 25th, 2003 @ 7:45 a.m.
Christmas Morning by Yogurt is arguably the best cut-scene scenario ever and a true classic Best of AoK design. Play along as little Timmy of the Frank family, and discover the magic of Christmas time in AoK. 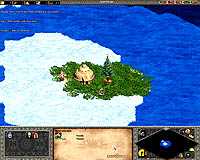 The design is an animated marvel with excellent audio, and a scenario skit that captures all the wonder of the Holiday Season. A favorite scenario of mine, and it can be played in both AoK and AoK TC. One of the most amazing things about the scenario is that it is one of the oldest Best of AoK designs there is — Created 4 years ago and uploaded on Christmas Eve of 1999, Christmas Morning has become a holiday tradition for many AoK enthusiasts. 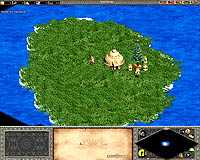 The interactive cut-scene scenario is very intuitive and all over in minutes…pick up the present…shake the package…guess what’s inside? A lasting impression, and the most wonderful time in AoK!
Merry Christmas!

Happy Holidays!
Posted by Aro on December 25th, 2003 @ 7:39 a.m.
On behalf of the staff here at Age of Kings Heaven, I wish everybody and their families a merry Christmas and happy holidays. 🙂

While we’re on the subject of Christmas, Cherub AnastasiaKafka has posted a thread in the Scenario Design forum wishing everybody there a big “Happy Holidays” as well as telling everybody about a new scenario she has created called “The Nativity Set”.

The mystery about the birth of Jesus is mainly prosaic. This infant, however, the first born of a Jewish artisan named Joseph and his wife Miriam (Mary), was to prove to be no ordinary child, for he was destined to play a unique part in history. He would be drawn to the dreams and visions of his people, and so clothe his life that he would give rise to a faith which identified him among many Jews as the Messiah, among many Gentiles as the Divine Saviour of the world, and for many others an undeniable respect for his life and place in history.

Another unique feature about this scenario is that it’s on a beta map – 50×50 tiles – making it the smallest map size possible for AoK. It has bugs stated in the read-me, but you’re allowed to extract and use it for your own purposes if you like. You can find it at the following link – The Nativity Set by Anastasia – Tsunami Studios

AoE III Title Ideas
Posted by Aro on December 24th, 2003 @ 6:28 p.m.
If ES released a new game continuing the Age of Empires series, what name do you think would sound the best? (It would depend on what ages you wanted it to be based on, but any age is a possibility at the moment.) One of the Age of Empires III Discussions frequent posters, Medieval_Warefare, has posted a thread asking “What would AoE III be called?” Here are the top five names the forumers have voted for:

All of the names were based around the Renaissance time period, so I guess we know what age most people want the game to be based on. What title would you prefer? Feel free to add your own ideas.

MFO Conquering Hero Tourney
Posted by Aro on December 20th, 2003 @ 10:07 p.m.
This is late news, but Mr. Fix-It Online is hosting an AoK tournament tommorrow (December 21st) that’s worth $2000 in prizes. Here’s some information from their site:

Top prize is $500, with 16 other folks taking home cash prizes.
The winner will recieve $500, with a total of 16 people taking home large cash prizes. The Map will be MFO Randomizer, a map developed, tested and published by MFO. The quarters, semi’s and final will be best of three, on Randomizer, Arabia and Gold Rush. The tournament will take place on the 21st of December, at 11am EST – thats 4pm GMT.

Hurry and sign up for the tournament. You can find out more about the Conquering Hero Tournament at the MFO AoK website. Good luck to all that enter!

2D or 3D?
Posted by Aro on December 10th, 2003 @ 10:46 p.m.
Routing Boy has posted up a thread in the Age of Empires III Discussions forum asking you “If you had the choice, would you prefer a 2D game or a 3D game?” Both have their good sides, such as a 2D game running better on most computers, and 3D games having excellent graphics. What type of graphics would you want to see in a new Ensemble Studios game? Feel free to voice your opinions in the thread.

Blacksmith Feature
Posted by Anastasia on December 6th, 2003 @ 1:09 a.m.
Zulu!! by OldGrex is a very entertaining historical and learning campaign with mild game play. Intended as a learning campaign for new players it provides a moderate challenge for new players, and subject interest for all. Two scenarios creatively depict two of the most notable battles in the Anglo-Zulu War of 1879.

New players will enjoy learning through fixed force challenges on a fine map re-creation of the historical KwaZulu (Zululand), and veteran players can indulge in an interesting tour like experience of the scenario subjects. All players will relive the amazing events of January 22nd, 1879, and the great battles that pitted rifle and canon against spear and shield. 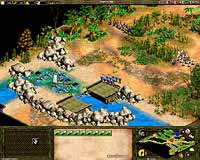 High Noon at Isandlwana is the first scenario and players play as Tshingwayo, Zulu war chief for Csetswayo. Players are given a large fixed force to realize the historic rout of the British army. Three objectives create the game play portrayal, and it is a relatively short and engaging scenario. Two aspects do greatly diminish game play in this scenario and could be frustrating for all players. The diminishing factor has to do with the three objectives where two involve bringing objects found to a prescribed location, and one is the capturing of a position with our hero Tshingwayo. Players must keep hero Tshingwayo (AoK Samurai) at the location where the flag was captured to realize the objective for victory. I moved my hero from the spot and was left to wonder after meeting the other two objectives why I didn’t achieve victory. The other aspect is a design flaw, because players are to be given a trade cart after defeating the British 3rd Column at Isandlwana, only if the player’s units are standing on the spot where it is created, then they do not receive the crucial element Trade Cart. So beware of idle troops in and around the British corrals, and near the flag position where one must bring Tshingwayo the hero to. Designer OldGrex plans to update this to ensure the aspect and objective, but in the mean time players beware. Play, learn, experience the history as the fierce warriors of the Zulu! 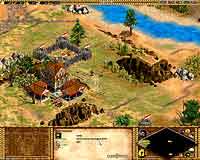 Chard at Rorke’s Drift is the second scenario perspective in which players play as British Lieutenant J.R.M. Chard in the battle that was also the subject of two classic movies, Zulu and Zulu Dawn. At a small mission station known as Rorke’s Drift, a group of 100 sick and wounded British soldiers was to fend off a ferocious assault by an army of 8,000 Zulu warriors. Players are given a small force and some buildings with relatively obvious areas where players can find the strategic advantages of the map design. Obstacles and elevations are placed so the new player can learn, and shape their defensive strategy. Load this scenario on the Hard difficulty setting for maximum playability. Players take courage, and bullets for the Martinis-Henry rifles and survive the onslaught of the Zulu!!

Special Abilities for Buildings
Posted by Aro on December 2nd, 2003 @ 11:08 p.m.
Medieval_Warefare has posted a thread in the Age of Empires III Discussions forum about what new attributes could be added for buildings in a possible new game by ES. For example, what different things besides arrows could be shot out of a castle or tower if you were to garrison certain types of units into them? Here’s a few ideas from the thread:

Feel free to post your ideas or comments on the subject.

Downloads Back Online
Posted by Aro on December 1st, 2003 @ 3:14 p.m.
This is an announcement that the downloads error has been fixed, and all the Blacksmith sections should be back online.