The University Update
Posted by Aro on March 30th, 2004 @ 1:03 a.m.
The University, Age of Kings Heaven’s old Strategy section, has gotten a makeover. It has a navigation-friendly look to it thanks to Dark_Warrior_1_’s helpful comments.

Not only does the University have a new look, but it also has a large new addition to it – a Design article section, covering Map Design to AI scripting which is still under construction. The University is now a good resource for all types of articles for Age of Kings, so feel free to check it out and submit your own articles to me. Try to ignore the fact that many of the articles are outdated, because the University has been unupdated for a looooong time. I’ll be sure to announce when the Design section is up.

Solving the Mystery of AoK Poll Results
Posted by Aro on March 28th, 2004 @ 6:32 a.m.
storycreator‘s poll he conducted in the Scenario Design forum a short while ago is over, and he posted up his results in an article at the Tsuniversity. The results are rather interesting, and it’s an over-all good read. Here’s one question and answers from the poll…

What are the reasons you still design for Age of Kings and didn’t change?

To view the complete results, just visit this article. If you want to see the original poll, visit this thread.

WCL – Week 8
Posted by Aro on March 24th, 2004 @ 2:17 a.m.
The Legion Clan’s World Clan League is starting on their 8th week, and it looks like they added a new rule that solves any problem that could arise if two clans have the same amount of points and only one can go on to the next round. Here’s some info from the website:

If 2 clans have a dispute for a spot to advace to the next stage of WCL (for example: 1 clan advanced to elite group and 2 other clans have 50 points each one and only one of them should advance), then we will take into consideration the result between these 2 clans that are in the dispute. In case their result is 2-2, then 5 games should be played to decide which clan will advance (all the 4 WCL maps + a full random game).

You can see the schedule for week 8, or you can check out the points table.

Season 4 – Fair Play Cup Results
Posted by Aro on March 21st, 2004 @ 6:14 a.m.
The RTS League has announced the winning clan for their Season 4 Fair Play Cup. It looks like the NeT Clan has been declared the winner, with the SuNo clan following with a close second. Here’s the scores listed on the RTS League website…

Congrats to the NeT Clan!

Already there are many great submissions, making it an “anybody-could-win” competition. If you want to read the rules or details of this contest, give the thread a visit. Good luck to all entering their screenshots!

The clan has also processed the roster-change requests today. Quoting from the site…

Note that all the roster-change requests have been processed today, so if you’re in WCL and you want to do new changes in your clan roster, take a look here.

Good luck to everybody in the WCL!

AoKH’s Two New Cherubs
Posted by Aro on March 14th, 2004 @ 7:21 p.m.
I would like to introduce Age of Kings Heaven’s newest staff members, Qazitory and Shadowflare.

Congrats to you both! 🙂 You can feel free to congratulate them at this thread in the Town’s Crier.

CERPIO Gladiator Cup II Tourney
Posted by Aro on March 14th, 2004 @ 5:50 a.m.
Announced previously over at the CERPIO Clan Website, CERPIO_MaNkKiN_ has announced on their news page that the sign-ups for their second Gladiator Cup Tourney has began.

Since the last Gladiator Cup tourney was such a success, they decided to host a second tourney with a $300 cash prize (courtesy of their member CERPIO_Dock). You can feel free to sign up, but make sure to do it quickly. There’s a 256 player limit.

Game Designers vs. Hockey Players?
Posted by Aro on March 11th, 2004 @ 11:20 p.m.
Thanks to Insane Sheep for posting this up in our Town’s Crier forum. ES had invited the Calgary Flames, a hockey team and big AoC fans, to have a tour of their studios in Dallas. With 16 copies of AoC ready to play, they went up against some of the ES AoC pros. Here’s the teams and game statistics as listed on the ES website…

The game was 2v6, turbo, fast, coastal map. In turbo, your villagers gather and build 3x faster than normal, and it’s vitally important to keep your early villager production constant, and to make sure villagers don’t have too walk too far.

I’m sure you all noticed that Age of Kings Heaven went through another change of seraphs.
Let me start by saying a big thank you to Philip D for all that he has done to keep Age of Kings Heaven as one of the most popular sites around.
I’m still not quite sure what caused you to leave, but I’ll respect the decision.

Next would be welcoming Aro, who’s served two seraphs (admirably so, I might even say) and has now stepped up to the plate to take over this particular rôle. Don’t be too jealous of him, as being a seraph is a lot of work and has a lot of responsibilities tied to it.

I wish him good luck in this task and hope it will give him as much enjoyment as it’s been giving me.

Season 4 DM Results
Posted by Aro on March 9th, 2004 @ 0:37 a.m.
KoTR_Noorse over at the RTS League has posted up the results for their Season 4 DeathMatch games, which seems to be a very close call, with the SuNo clan winning by 44 points and the CsI clan following close behind at 42 points. Here’s the scores that were posted on the League’s website….

Congrats to the SuNo clan!

RTS League Season 5 DM Clans
Posted by Aro on March 7th, 2004 @ 5:55 a.m.
As posted by KoTR_Noorse at the RTS League website, the clans for Season 5 of the League’s AoC DM divison have been chosen out of the 18 applications recieved. The following 11 clans have been selected by the league to participate int he 5th Season:

Three clans, _FaMiLy, DaMaGeD and Ofb, have been selected to be back-up clans in case any of the above clans cannot participate for whatever reason. The new season starts March 8th.

Blacksmith Feature
Posted by Anastasia on March 5th, 2004 @ 4:50 a.m.
Defend the Castle by zyxomma100 is a great single scenario, and is pulse pounding, nonstop micro-strategy. The outstanding design is a creative AoK twist on the classic game of the same name by XGen Studios. 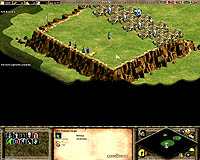 The game play is fast paced arcade action, and players progress through the challenging levels called rounds, while the enemy’s attack increases in strength and numbers. The amazing specialized unit selection with unique unit abilities add to the extreme challenge. Players advance into new rounds by successfully defending the castle and using the unique ability of the Alchemists (Monks) to convert enemy units for training. Players can train converted units during or between rounds to one of five defensive units from an intuitive training menu inside the game. I played for hours the first time I played, but I was a bit frustrated by the time I reached round five. Victory is assured as players are taken to the up-beat screen to try again, but the levels and a special timer allows for continued play against personal best records. 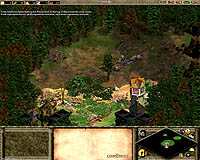 The creativity in this scenario is excellent and is realized in the concept of adapting a classic game to AoK. zyxomma100 gives us an incredible arcade experience, but don’t expect a romantic adventure story. The only story found is in the advanced commands, and read while two War Elephants charge your Archers! The Map is not a pretty town design but the menus are precisely designed and very intuitive. 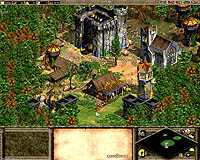 Round 7 is where my castle crumbles! Try as I might, I couldn’t get past the level. This is where I get to blame the game! Seriously, there are some problems with the training menu, and the unique play also takes getting used to. The menu is made up of idle AoK units, and sometimes when I would convert units at the same time the game would cheat me out of them by spawning them simultaneously into the menu. The game can also cheat a player out of units after they are trained in a similar way. I thought I was receiving units for kills too only I’m not sure. For the training of units the player needs to train them one by one, and also keep any units away from the common spawn point on the castle grounds.

So try to keep all that in mind as wave upon wave of Teutonic Knights and War Elephants storm your castle, and if you last until the 6th round it won’t matter anyway…unless of course you can Defend the Castle!

World Clan League – Week 5 Schedule
Posted by Aro on March 3rd, 2004 @ 2:09 a.m.
Yesterday began the 5th week of the Legion Clan’s World Clan League, the Tourney for a cash prize of 25,000 dollars. The Legion clan has put the schedule up for this week on this page. Want to see the results for the Tourney so far? Make sure to check out this page for the latest results in the games played for the League. Again, good luck to all of the clans participating!