Quoted from the thread by Von Manstein in G&SD:

Okay, some people want to chat and play AoK, so why not make a forum party?

Want to find out what time that is? Use the Time Converter.

Remember to sign up for the AoKH Ladder and to report your games (if you’d like). If you can’t make it on till later in the day, don’t worry. I’m sure people will be popping in and out for the whole day.

Get out and play some of your fellow forummers!

Blacksmith Feature
Posted by Anastasia on July 21st, 2004 @ 9:50 a.m.
Truly Countless Bodies by bleedteal is a truly excellent campaign! The one scenario holds history in the balance at the momentous Battle of Chalons. The bloody clash also called the Battle of the Catalaunian Fields or the Battle of the Catalun, occurred on September 20, 451 AD, pitting the Roman general Aetius, assisted by King Theodorid’s Visgoths and other foedarati allies, against Attilla the Hun and his alliance consisting mainly of Gepids under our scenario’s hero King Arderic and Ostrogoth forces. 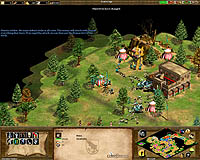 Historians dispute the number of men gathered that day for battle, but some suggest that Atilla’s army alone ranged in the hundreds of thousands. The historian Jordanes’ figure for number of dead in this battle is 165,000, excluding the casualties of the Gepid skirmishes (15,000) previous to the main battle. Hydatius, a historian who lived at the time of Attila’s invasion, reports the number of 300,000 dead. Both figures are high, and modern historians suggest a number far lower. Whatever the arguments…On the following day, the battle fields “were piled high with bodies and the Huns did not venture forth,” cadavera vero innumera, or Truly Countless Bodies!

The kings and generals and their massive armies have been assembled again in this amazing scenario, and for a chance not only to relive, but also to ‘tip the scales’ and change the course of the historic battle. The player leads forces in the pivotal role of Arderic who is at the right hand of Atilla. Our scenario’s hero Arderic has been given to General the cavalry in the time before the battle, and is challenged to realize as many side quest objectives possible within a time limit to aid in a victory for Atilla. The main historic battle’s outcome is also up to the player, as Arderic is called to flank Atilla’s advance. 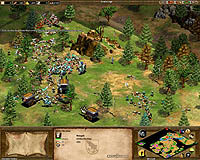 The game plot is non linear and the open map design invites players to choose many strategies and courses of action. The varied side quest are extremely challenging, and there are more than can be completed in one game, then add that to the multiple outcomes for victory and it makes replaying the fantastic game a must! I was compelled to play many times, as each time I played I discovered new and interesting objectives to apply strategy to. The balance is creative and their is fun for the new player as well as challenges for the hard-core experts. Try as I might I could not take the Roman Castle in one of the most difficult objectives. However, the game play is awesome win or lose and I am obliged to play again.

History has recorded the outcome of the Battle of Chalons, and while historians continue to ponder the details, bleedteal has arranged the means to relive or change it in this Best of AoK must play campaign. A question remains for me, can the Roman Castle be destroyed in the midst of Truly Countless Bodies?

17 year old Jing from China is the winner of FOPT’s “Simply the Best” Tournament, challenging the 32 currently best AoC-Players from all over the world to face each other in a series of 1v1 Arabia games.

Jing aka _MyST_BT4 defeated his fellow countryman _MyST_IORI_ in the Final series 3:1 and takes home US $500 in hard cash while Iori’s excellent performance throughout the entire competition is being awarded with US $200.

To watch the deciding games, head to the FOPT Clan forums, register, and download the games.

Your job is to create the most beautiful, eye appealing, town, city or village, using the AoK Scenario Editor. However, this town, city, or village must look as much like a swamp as possible. This is the type of contest where the shallows terrain is great to have. If you want to participate, please send your contest entry to Angel Aro – the entry must be received by August 25th (10:00 EST). It must meet the requirements set rules to be accepted (for the rule listing, go to the link below). Please note: if you send in a scenario that breaks the rules, you will be disqualified. Please make sure it complies with them before you submit it.

FOPT’s Simply the Best: Final
Posted by Aro on July 16th, 2004 @ 3:26 p.m.
As announced by FOPT_Strawberry at the FOPT Clan website, their Simply the Best tournament has reached the finals with two players left. Here’s the two matches that decided it all in the semi-finals…

The winner of the next match will win $500 in US dollars and the title of “Simply the Best” player. The runner up will get $200 dollars, so both players will go home with some prizes. To check out the games for the semi-finals, register and download the games at the forum thread.

Best of luck to the two players!

GGL’s $8000 AoC Tournament
Posted by Aro on July 14th, 2004 @ 10:26 p.m.
The Age of Empires II: The Conquerors tournament (which has a prize cash value of $8000) being held at the Global Gaming League has been a big success so far, with many players signing up for the tournament. Quoting Archangel…

The Global Gaming League and Ensemble Studios are proud to announce that signups have been extremely successful for the Age of Empires II: The Conquerors addition to the GGL’s $75,000 2k4 Online Season.

“Once again, Ensemble Studios would like to show support to our dedicated gamers by matching the GGL’s prize money for The Conquerors portion of the GGL 2k4 Online Season, bringing the total cash purse to $8,000.” said Tony Goodman, President of Ensemble Studios.

“The mutually beneficial relationship Ensemble Studios shares with their dedicated gamers is an unquestionable factor in the repeat success of their award-winning Age franchise and is an excellent model for other developers and publishers to follow.” said Jason Carlton, Director of Gaming Operations of Global Gaming League.

GGL members compete through the Ensemble Studios Online (ESO) network to see how they stack up against gamers from around the world. For more information on how to get started, please go to www.GGL.com.

About the GGL
The Global Gaming League is building the next generation sports entertainment brand through competitive video gaming. The GGL™ is an unbiased governing body that stages high-quality video gaming competitions online through its proprietary website, and live events throughout the country. GGL also manages and promotes elite players. The GGL is creating stars and building a fan base where dedicated players gain recognition for their lifestyle, skill and commitment to V-Sports tm. The GGL tour creates an unparalleled entertainment experience for V-Sports players and spectators and a fresh and unique opportunity for partners and sponsors to reach this desirable demographic. For more information please visit www.GGL.com.


Special thanks to Archangel for the news.

The players will be going against eachother in a “best of 5”-type series of matches. The deadline for the semi finals is Sunday, July 18th. Good luck to the remaining competitors!

Congrats to Gordon B!
Posted by Aro on July 11th, 2004 @ 11:23 p.m.
I’d like to congratulate Gordon B, who is Age of Kings Heaven’s newest Cherub. He’ll be the new Ladder admin and will be a Moderator of the General & Strategy Discussions forum soon enough.

Congrats again, and good luck! Feel free to congratulate him in the Town’s Crier.

FOPT’s Simply the Best reaches the 3rd round
Posted by Qazitory on July 7th, 2004 @ 9:43 p.m.
The experts only tourney hosted by FOPT has reached its 3rd round. With 24 experts already out, the remaining 8 will fight for prizes totaling $700. The brackets show us the cruel truth – players such as Capoch, Buddha and Windy are already out.
This round’s matchups are:

New RTS-League Script
Posted by Aro on July 4th, 2004 @ 8:46 p.m.
Over at the RTS-League, Webmaster FOPT_Cloudberry has posted up a news article telling everybody about a new Script he developed for all clans participating in the League.

You can now get your clan’s rankings/schedules on your site very easily and with your site’s look and feel. The script is totally live and it fetches the data very fast from RTS-League.

For more info go to CloudMods
Note that you have to register to be able to download/post. Registering is simple and fast.

World Clan League Season 2 Sign-Ups
Posted by Aro on July 2nd, 2004 @ 3:21 p.m.
The Legion Clan’s World Clan League is starting season 2 soon, and they have posted up the sign up sheet for all of the clans that want to participate. Sign-ups are only until the 15th of this month, so hurry and sign up while you still can! Want to find out how the World Clan League works? Check it out at their website.