Interview with Gordon Farrell
Posted by Anastasia on September 22nd, 2004 @ 11:06 a.m.
Heaven Games VIP and scenario design phenom Gordon Farrell of Stainless Steel Studios Inc. interviewed by Storycreator at the Tsuniversity. The popular ‘Spotlight On’ series of Q&A interviews provided a fascinating glimpse into the life and craft of scenario designer Gordon Farrell. Links to the interview found here in our Scenario Design forum.

Excerpt from Tsuniversity, Spotlight On Gordon Farrell:
“Interactive fiction is an extremely compelling narrative form. All narrative forms involve two things: the goals the characters are pursuing and the things they have to do to achieve them. In formal narrative theory these are sometimes called action and process. In a well-designed scenario, the goals are set by the designer, but the processes have to be completed by the player. No other story-telling medium involves this kind of praxis, wherein the reader actually works to earn the advancement of the plot. It is a completely new narrative form. As a professional story-teller, how could I not be excited by it?” – Gordon Farrell

Read the entire interview by following the links in the Scenario Design thread by Berserker Jerker. Readers can comment on the interview in the forum or at the Tsuniversity.

2004 Pretty Town Contest Winners
Posted by Anastasia on September 6th, 2004 @ 8:46 p.m.
Congratulations to Jerker’s Widow for creating the ‘swampiest’ town, and taking the top prize in the 2004 PTC!

This year’s ‘swamp’ theme was perhaps the greatest PTC contest challenge ever for AOKH map-designers, and yet the designs were fabulous. iNtRePiD took second place and prize with his excellent map, and Cknchaos placed once again in third after winning the contest two years ago, LiQi also received an honorable mention for coming in forth place…Congratulations all!

Check out the Winning Results, and go here to the “>Official Contest Thread and congratulate all the contestants!

Blacksmith Feature
Posted by Anastasia on September 1st, 2004 @ 2:14 a.m.
Fithel by Gasper is a gathering story of courage inside a challenging mix of game play. The faithful brother, Fithel endeavors to rescue his fair sister Aria from enslavement at the hand of a ruthless King. A most difficult siege must be expeditiously pursued. Lead the outnumbered and ill equipped, rag tag regiment of soldiers and woodsmen to victory. Death looms largely for Fithel and his band in a land where Kings and Lords align to reign in terror, and where only providence can prevail against them. 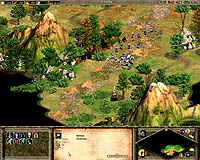 The game play is an intricate challenge and requires players to save often. I experienced some frustration in the objectives, and I found the objectives are at first slightly confusing, puzzling, and even somewhat misleading. Speed is as essential as the strategy and tactics that must be employed in a race against time. At first, I could not win on Moderate with many saves, and switched to Standard to achieve victory. The enhancements for Moderate seemed to double the enemy’s numbers, and the overall difficulty seemed impossible on that level. Only after revisiting the level I found a totally different experience that did seem possible, and what I played was in fact good moderate game play. There also was a seemingly misleading aspect of the game plot indicated as surprise to look for in the game. The surprise seemed to be given without being tied into the conditions needed to win, and did seem to depend on luck, and on luck I didn’t happen to have playing many times. However in the end, along with the difficulty came a feeling of great accomplishment, and with no game destroying bugs, I found Fithel very enjoyable to play. 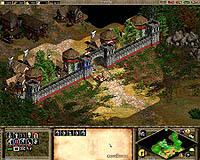 The story is rather shallow, and that is not to be unexpected, or necessarily seen as a bad aspect for a scenario. However, the story also has poor character and/or plot development, and most of it comes across as an afterthought. Fithel is touted as just one tale of the fictional ‘Lonely Kingdom of Spey,’ but it fails to introduce our hero, and the other characters, or their motivations with any foresight. Instead all characters are abruptly introduced, and the story never rises above an attempt to explain away the weak game plot. Still at the end of the day, I think the fun playing Fithel will help most players to forgive the story.

The design is well above average and in my initial Blacksmith Review it received a 3.8 overall rating making Fithel by Gasper just short of the Best of AoK. My rating may be made higher in the future as I reconsider the balance, but otherwise Fithel is destined to remain among the many good Blacksmith designs that are below the 4.0 rating. For me most 3.0 to 3.8 designs are great fun to play, and Fithel is outstanding among them. Thankfully, as I continue to find new ways to pontificate the finer points of scenario design, I haven’t lost my enthusiasm for great scenarios like Fithel, and when all is said and done; who can resist a good microing siege with a slippery slope effect? Play Fithel at the Blacksmith!