Blacksmith Trick or Treat
Posted by Anastasia on October 31st, 2004 @ 10:07 p.m.
It’s All Hallows Eve at the Blacksmith, and we’ve selected a few fitting treats for all the ghouls and goblins here at Age of Kings Heaven! Download these great files and have a Happy Halloween! 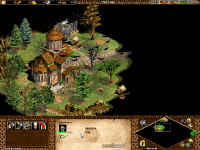 Halloween, by Era Productions
Halloween – trick or treat turns to horror in this short cut-scene scenario, as our friends from Era Productions wish everyone at AOKH a Happy Halloween! Thanks Guys!

Bats To Replace Birds, by dark_blade
Bats for your belfry? This simple yet wicked mod will darken the mood of any scenario! I used this to edit the Halloween design for the screenshot. 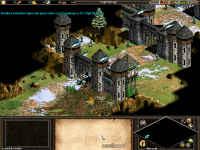 Vlad Dracula, by Great Emperor
Step into the nefarious role of the historic Dracula this Hallows Eve, inside this challenging campaign! Vlad Dracula is excellent, and will no doubt be fully featured in the future. Play it tonight on the recommended ‘fast’ speed for a chilling experience! 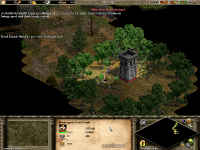 Dancing Days are Here Again: Final, by Bon
Dancing Days, is a prescription of dark sadistic pleasures, that will both captivate and disturb. Experience this twisted RPG, that is one of my all time favorites…This scenario is creepy!

New Staff Member
Posted by Aro on October 30th, 2004 @ 3:50 a.m.
We now have another staff member that will help out with moderating the Town’s Crier and with the news – Adder. And lucky for us, he was a member of our community long before now, so it shouldn’t be too different except for the fact that he can ban you. 😉

Server Downtime
Posted by Aro on October 29th, 2004 @ 7:43 a.m.
Tomorrow (or later today) the Server will be taken offline for a bit (sometime between 6 AM to 4 PM EDT) so some upgrades can be made. It will take about an hour to complete, and you might not be able to access the site during that time.

Blacksmith Feature
Posted by Anastasia on October 26th, 2004 @ 12:18 a.m.
Towton 1461 AD, by MCrnigoj is a challenging fixed force campaign with an engaging historical theme depicting what is known as “England’s bloodiest battle.” The battle of Towton was waged early — just six years into the thirty year struggle for the throne of England known as the War of the Roses. The brutal battle is generally viewed as indecisive of the long and destructive civil war, however in terms of the sheer ferocity and lives lost, it is perhaps the most memorable. In any event, it is certainly fitting of this awesome one scenario campaign that is a virtual reenactment created for Age of Kings. Agers, relive the bitterness of the historic battle waged in a snow storm, and experience the driven snow at Towton that was said to have turned to crimson from the bloodshed. 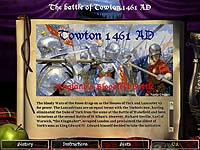 The campaign begins with captivating cut-scenes that characterize the historical figures and portray the preparation and the battle’s opening. Although Marko Crnigoj concedes a less than 100% accuracy of the historic portrayal, I was unable to find a detail of the history not visited in some way in the map design and game play. Besides this is a scenario with game-plot, and it provides the potential for the player cast on the side of the historic victor (the Yorkist faction), to be defeated by the Lancastrian faction. A five-second history lesson on the War of the Roses is, the name came from the badges of arms worn by the two factions. The symbol of the House of York was a white rose. The symbol of the House of Lancaster was a red rose. The actual phrase “War of the Roses” didn’t appear until Shakespeare’s time, and Shakespeare did make use of this imagery in Henry VI and in Richard III. In contrast to any romantic images, this campaign paints a much more realistic picture of the cruel war and fierce battle at Towton’s bloody meadow. 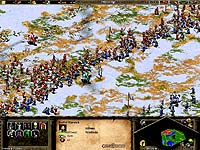 The game play is a new twist on the enhanced fixed force campaigns conceived and made popular by scenario designer MCrnigoj, in that players only control a limited number of units to effect the outcome. I’m not sure, but I think this is the first of the unique designs by Marko where the ‘Kill Ratio’ plays a major role in achieving victory. Still, the unique morale system that was featured in his previous titles, continues to challenge us to shape our strategy using calculated tactics. The limited number, and variation of actual player units might cause some to consider the game play to be easier in regard to tactical advances. However, there is a built in personality for the key hero class units, and it posed a new difficulty to controlling them. The three major heroes; King Edward IV, Earl of Warwick, and Lord Fauconberg are being controlled with triggers to behave in their historic personalities. This aspect of the built in personality was somewhat disconcerting for me, and although it added to the overall challenge it was not particularly favored by me. From the standpoint of creativity for the concept it is excellent, however it was a cause for frustration and especially in the Moderate and Hard levels of difficulty. Try as I might, I could not achieve victory on Moderate in time for and prior to this feature, and I think it’s fair to imagine that the balance of the Hard level makes the scenario virtually impossible to achieve victory in. Therefore, I recommend playing on Standard difficulty first and then if you are experienced player to play Moderate. Also, I should note that this game is for The Conquerors expansion only and is recommended that it is played on a system with at least 256MB of RAM. However, I did play on two systems and while on a lower end system (128MB RAM), I found the lag created bearable. 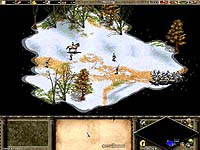 The experience of the campaign is phenomenal, and even if your not up to the test of the game-play, I recommend the campaign just for the opening scenes alone. Whatever the motivation, I doubt that anyone will be able to leave the campaign without victory due to the incredible portrayal of the enemy faction and the audio taunts of the Duke of Somerset. Finally, to intensify and further underscore the historic realism created, there is two versions of the campaign given, and with one intended for use with a ‘snow mod’ that was easily installed and uninstalled using MPS 2.0 (Mod Pack Studio). Nonetheless, players can experience the bitter forecast of the fateful day in both versions of Towton 1461 AD, by MCrnigoj, and at the Blacksmith now!

ModPack Discussions Beautification
Posted by Shadowflare on October 18th, 2004 @ 2:50 a.m.
The old AoKH ModPack Discussions forum needs some renovation. Some ideas that we already have are for a ModPack Guidebook type of thread, an Active ModPack List, and even possible ModPack design contests sometime in the future.

If you have any suggestions for the improvement of this forum, or any information or other contributions, check out The ModPack Discussions Beautification Thread. Write an FAQ? Think the old Library thread should be unstickied? Have a suggestion we haven’t thought of? Let us know so that ModPack Discussions can be the best they can be!

Have a Suggestion?
Posted by Aro on October 14th, 2004 @ 11:47 p.m.
I want to put up content that you guys, the viewers/crazed fans of AoKH, want to check out. If you have a suggestion for new content at AoKH, feel free to post it.

Away Until October 9th
Posted by Aro on October 5th, 2004 @ 3:58 a.m.
Accidentally forgot to post this on Sunday. ;-P As the title might tell you, I’ll be away until October 9th. I’ll still be available via e-mail if anybody needs me, but do me a favor and don’t make any forum-related requests until I get back.