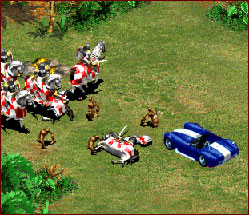 So you just finished playing a game, and now you feel like having some fun,
maybe stomping some computers into oblivion using… “unconventional methods”.
You’ve come to the right place; like most games, Age of Empires II comes with it’s
own built-in cheats, that allow you to defy logic/gravity and gain some extra loot.
Be warned, however; these cheats are very addictive, and you might find yourself
spawning a few Furious the Monkey boys if you’re ever close to losing….

“Q) Can you tell us the story for “Villager Male David Lewis”?
A) Tragically, David Lewis is a full-time employee of Ensemble Studios, and I am stuck working with him on my next project.”

“Q) Please fill us in on the VDML joke. Who is it making fun of? Why did that person always say that? Why is he naked?
A) I am honor bound not to tell. It commemorates an event at a convention last year. If you see me at E3, ask again, and I’ll direct you to the person involved himself and he can tell you if he likes. He’s naked because he WAS. (I.e., it’s for historical accuracy.)”
–ES_Sandyman

How Do You Turn This On — Spawns a Cobra Car at your Town Center,
a fast, destructive, and all-around sexy car that shoots bullets

To Smithereens — Spawns a Saboteur at your Town Center,
a powerful, fast unit with a bonus against buildings that self-destructs
(similar to a Petard in The Conquerors, except more powerful)

I R Winner — Win the game

Natural Wonders — Places you in the shoes of the wildlife,
allowing you to control all Gaia units

Torpedo # — Destroys a player (replace # with the player number)