Age of Empires II: The Conquerors™ is the Expansion pack for Age of
Empires II: The Age of Kings, and adds 5 new civilizations, 18 new maps, and
many other gameplay-changing features. 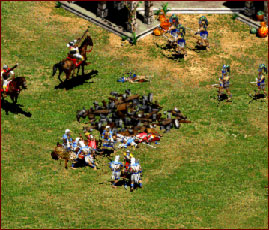 With the Expansion pack comes several gameplay changes, balancing out the
game. Among these improvements come unit changes, such as increased
speed, rate of fire, and creation speed for the Cavalry Archer, civilization
changes, such as the balancing of many civilization attributes, and even large
changes such as an improved Scenario Editor and ship formations. There are also
new implementations like new Random Maps, new snow terrain,
new game types, farm queueing, new technologies, and five new
civilizations.

In the new game, you can find the following units: 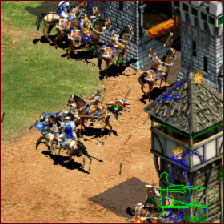 The new civilizations in Age of Empires II: The Conquerors are the
Aztecs, Huns, Koreans, Mayans, and Spanish.

How Ensemble Studios Picked the Civilizations

(Posted by ES_Sandyman in our forums.)

THE NEW ARCHITECTURE SET: the possibilities were New World, India, or Africa.
Frankly, we thought the New World civs were the most exciting. Don’t waste your
time flaming us about how they were stone-age savages. All you do is show your
ignorance. Go read a book or something. We knew that the Aztecs were cool, had
name recognition, and were defeated by a concatenation of lucky flukes. Maybe
we’ll do India and Africa another day.

WESTERN EUROPEAN – the most important nation in Western Europe, whom we’d
left out of AoK, was clearly Spain. Even though Spain was even stronger in the
Renaissance, they had a great campaign storyline (most everyone’s heard of
El Cid), and did plenty of stuff in the Middle Ages. So Spain was the obvious
choice here. The only other contender was Italy, and Spain was better
because we’d already decided on having New World civs, so Spain gave them
someone else to fight.

ORIENTAL – here the choice was basically between the Khmers, Tibetans, and
Koreans. We went with the Koreans for four reasons: 1) they’d been in AoE,
so we were nostalgic. 2) they had really cool turtle ships. 3) Korea had
better name recognition from at least our American customers. 4) frankly,
we thought the potential sales from Korea were attractive. While this wasn’t
the most important point, we didn’t just ignore it.

EASTERN EUROPEAN – the choice was between Huns, Swiss, Magyars, Habsburgs,
or Slavs (the latter being an all-inclusive group in which we’d put Poles,
Russians, etc.) We speedily decided the Swiss were too Renaissance, the
Habsburgs were too obscure (besides, I hate them. I think they were a bunch
of untalented reactionaries who looked funny). This left Magyars, Slavs,
& Huns. For better or worse we chose Huns. Here are the reasons why: