A little tinkering with a genie editor reveals that AoK is filled with duplicate buildings. There are four barracks, one for each age; two siege workshops, one for each age where you can build them. However, there are twenty town centers and no less than thirty-two units all unhelpfully called ‘Gate’, making the modding of gates and Town Centers a difficult proposition. This article explains the purposes, relations, and naming conventions of these units and their even more numerous graphic IDs. Armed with this knowledge, you can add new graphic sets more easily, and even create new sets of gates!

There are two ways refer to individual units: by ID number and internal name. Unfortunately, ID numbers are completely arbitrary. You’ll find some corresponding units with consecutive IDs, and some hundreds of entries apart. However, internal names are consistent and precise, though somewhat hard to read. The same logic applies to the individual graphic slots, where the names are very similar to internal unit names. This guide will use and explain these compact names such as GTAB3 and RTWC4XD3.

The internal names of the various Town Center units follow this pattern: RTWCxn

Where x is age number:

n is a one letter code denoting what part of the Town Center the unit corresponds to. Note that the base TC units are simply RTWCx.

There are five Town Center units for each age. Here are the five Castles age versions for the Middle Eastern buildset, along with the base dark age unit. 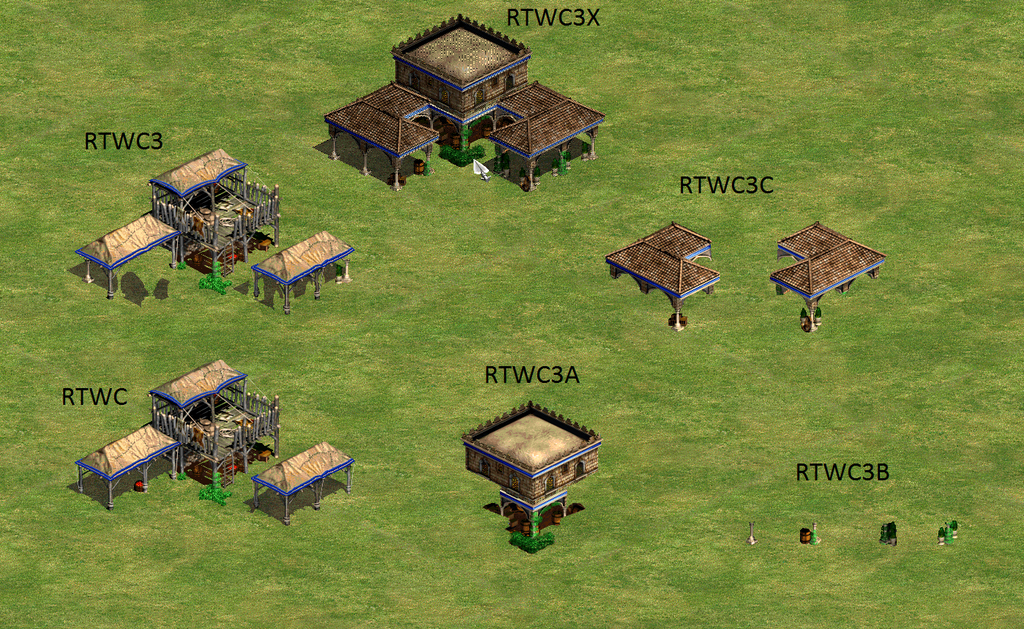 RTWCx is the main TC unit, where villagers and technologies are purchased. Standing graphics show the shadow and side pillars.

All ages have RTWC1A, RTWC1B, and RTWC1C annex units and RTWC1X as head unit (Dark age variants are always used for annex units, so RTWC3X mostly looks like a dark age TC until you advance)
Standing graphics: RTWCxN4b
These units have snow and damage graphics

RTWCxX – Preview: all graphics included with deltas
All ages have RTWC as stack unit
Standing graphics: RTWCxCNb
These units have snow and damage graphics

These are the buildings constructed by villagers. Their standing graphics appear when placing a new TC. They also appear in the fog of war.

All town center graphic id names have the following format:

I is Italian
X is also Slavic

** is a two or three character code

Generalizing the age and buildset, the slots correspond to following slp content, with visual examples are from the Middle Eastern Imperial TC: 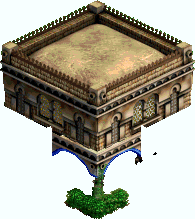 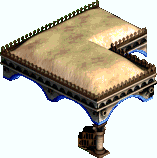 RTWCxCNb – Preview graphics: blank slp with deltas for all other graphics. Standing graphics for RTWCxX 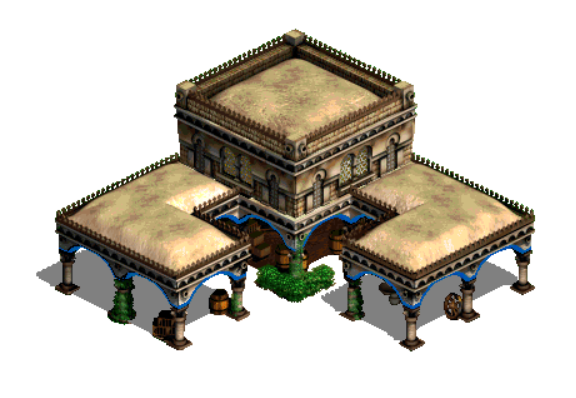 As far as I know, no one has felt it worth the time to align snow and flame to new graphics. Copying the graphics from a similarly shaped existing TC is sufficient. 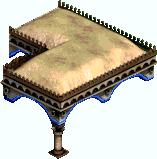 The internal names for gates have this format: GTnmx

Somewhat less abstractly, notice how the third letter changes with orientation in this screenshot: 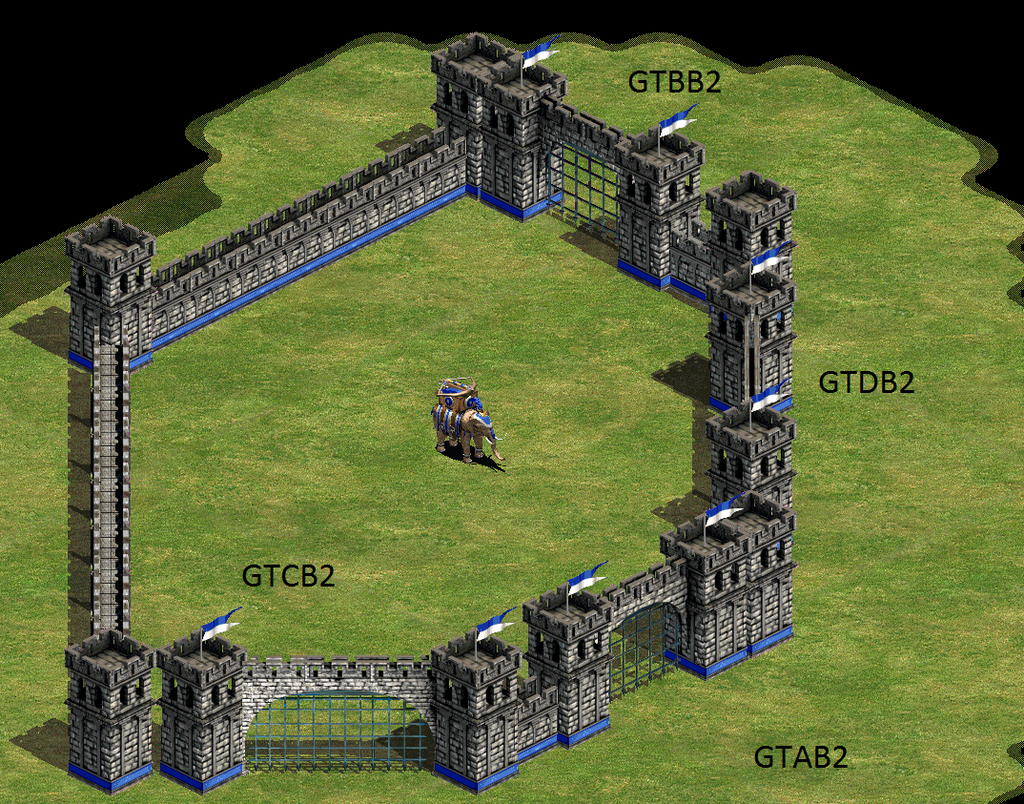 m denotes what part of gate the unit corresponds to

Note: The stone variants of these units are the ones unhidden in the editor

GTAXx is the unit that actually appears in the builder menu, but all are enabled by techs. The automatic orientation seems to be hardcoded.

There is not an upgraded variant to worry about, but otherwise the same conventions are followed.

If you copy these units and adjust the annex, head, and transform units accordingly, new gates can be created.

Finally, an aside for modders struggling with the 900 unit limit: every orientation has its own gatepost, (GTnCx) but you can reuse the same one for all for types. (I.e., set annex units to GTAC2 for all stone/fortified gate units) Gates are placed in scenarios as closed gate units, so this change doesn’t break old scenarios. Though you will need to remove several effects in the Fortified wall technology to properly use the units you’ve freed up.

m denotes what part of gate the unit corresponds to

Generally, these five characters will be the name of the gate unit that uses the graphic.

b is a letter referring to buildset:

I is Italian
X is also Slavic

GTnAxN1b – Slot for animations. Closed gates have none, and it is therefore unused

GTnBxN1b – Slot for animations. Open gates have none, so this slot is unused

GTnCxNNb – Graphics for gatepost
Includes deltas for shadows and dummy animation slot (Except GTAC2NNb, which has none)
Since GTACxN1b is used as the standing graphic, these deltas are irrelevant

GTACxN1b – Blank slp with deltas for flag, shadow and tower graphics
n=A is special. Other n values are just flags.
This graphic is used by all gatepost units

GTnCxC0b – Shadows for the three stages of construction

GTnCxCNb – Graphics for the three stages of construction. Includes deltas for shadows 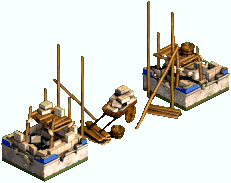 GTnX2NNb – Preview graphics: blank slp with deltas for all other graphics

GTmnxSb – Snow graphics. Blank slps and no deltas mean that gates do not change appearance on snow. Nevertheless, processing power is still used to superimpose these graphics on gates in snowy terrain.

GTmnxD1 – Set of delta flame graphics that appear at 25% damage

GTmnxD2 – Set of delta flame graphics that appear at 50% damage

GTmnxD3 – Set of delta flame graphics that appear at 75% damage


Do you want to comment on this article? Thank the author? Tribute resources for its improvement? Raze it to the ground?

Come by and visit its thread in the University Forum!